I’ve gotten a little out of control with the ice cream cakes.

Here is how it started…

Katy’s boyfriend Brando was having a birthday.. Katy decided to have a party for him as a result.. and I said “oh, I will make a cake”.  I asked what kind he wanted and Brando said “ICE CREAM CAKE!!” (yes… he yelled). 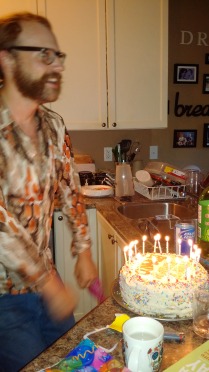 Look at how happy Brando is to get ice cream cake!

So, me being the cheapskate that I am decided to make one rather than paying some ice cream place $40 or $50 bucks for one.  Plus, I thought mine would be better.  I was right.

I didn’t make my own ice cream, but I did make various elements of it and hey, I melted the ice cream myself!

Okay, so the cake made 16 servings and it was all gone in one night.  Then I saw my friend Kirk and he was all sad he missed the birthday party.  So I said “well, next time it’s someone’s birthday I will make another ice cream cake and you can have some!”  and he said “MY BIRTHDAY IS NEXT WEEK!”

So of course I made Kirk a cake.

I used store bought ice cream (Chapman’s guaranteed  nut free as Kirk has allergies)… I made caramel sauce, cookie crust and chocolate ganache to layer it… and a frosting that I found when I Googled “ice cream cake frosting”… Someone suggested it, and it worked out nicely.  Not your typical frosting… no icing sugar!!

Anyway… this is how I made it…. or rather, them…

First, make the Oreo cookie crust, bake and set in fridge to cool.

While your crust is cooling, set out carton of chocolate ice cream to melt slightly.  Melt to whatever consistency works for you… I leave it until it’s just quite soft but not yet liquid.

While ice cream is softening, make your Caramel Sauce and Chocolate Ganache.  Set in fridge to cool.  The sauces have to be cooled off yet not so cool that they harden in the fridge! (the chocolate can likely cool on the counter.. depends on how quickly you work)

Once crust is cooled, poor caramel onto it.   Set  in fridge to cool completely.  Once it’s COLD, take butterscotch ice cream out to thaw.. and scoop thawed chocolate ice cream to form a layer…

(hint: each time I have had too much ice cream… some I repackaged and refroze the first time.. the second time I did this, I made another smaller cake in a pie plate – see the chocolatey one below).

Place in freezer to firm up… once the chocolate ice cream is fairly firm (doesn’t have to be rock solid.. just somewhat frozen)…. add the cooled chocolate ganache onto that layer.. it should be cooled, but again.. if you refrigerate it too long it will harden and you’ll have to melt it again…

Once the ganache layer is spread, add the layer of butterscotch ice cream.  Spread evenly and set in freezer for at least an hour to freeze.  (for some reason each time I seem to have more chocolate ice cream than butterscotch.. no idea why…)

Note: the frosting is temperamental.. meaning that it doesn’t take kindly to having food colouring added.. it kind of splits and ends up looking.. well, pukey.  So don’t do that.  I used leftover chocolate ganache and caramel to write on the cake.  Freeze for several hours or until firm! (overnight is best.)

Now, when I’ve made these, each time I’ve had leftovers.. a bit of leftover crust, and ice cream .. and sauce.. so last time I made a “small” one for home.. in a pie plate.. so did crust, caramel, a bit of butterscotch ice cream (there wasn’t much left!) and then squirted the rest of the ganache on top… also delish.

Bottom line is that there’s no super right or wrong way to do it… use whatever flavours you like best and experiment! BUT make sure it’s FROZEN!   🙂