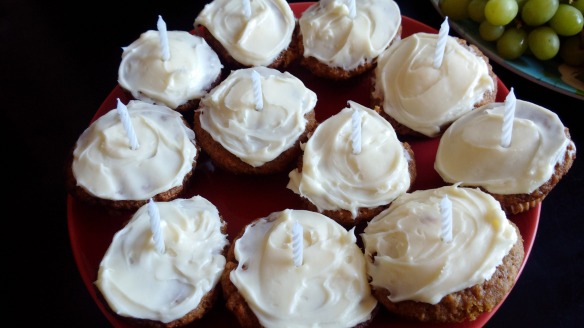 We were celebrating my son Josh’s birthday (late) with my family as well as my brother in law Joe’s birthday (a little more on time…)  I volunteered to make dessert and asked my sister what type of cake Joe would like as he’s fairly particular.  She said he liked carrot cake and white cake with strawberries… okay done!

We were having a BBQ as it made more sense with the number of people we had… so I elected to make cupcakes.  A little more portable and easier for others to take leftovers with them.

However…. I was also going to make a spicy noodle salad to take along to my sister’s… which I started making the dressing and then realized I didn’t have all the ingredients…. so shelved that project. No problem…. there’s always boatloads of food at the family dinners.

So proceeded to make the cream cheese icing.  And I was mixing it up… all I could smell was garlic.  From the dressing I had started to make I guess….. and then I tasted the icing.

And it tasted like…. garlic.  Because in my rush I had used the knife I had been using to chop garlic to cut off a hunk of butter. Because I’m a genius that way.

Sooooo…. I thought maybe my tastebuds were lying to me… so I put some on a spoon and asking Josh to taste it… he said… “uhh, it’s okay… wait… is there GARLIC in there??” Ummm…

Got all the cupcakes in the car and the icing and heading to Dundas for Birthdays… oh, and Father’s Day.  Awesome.  Running late as usual…. and I have gross cupcakes for dessert.

Got to my sisters, dropped Katy and Josh off to swim and be delightful while Marc and I ran out to buy icing sugar, cream cheese and butter.. no garlic.  Drove around looking for the grocery store (I don’t really know Dundas well…)  Long story short… got kinda lost, ended up going to the furthest away store.. got what we needed and arrived at my sister’s house.  The family tried the original icing and said it was fine….. so that’s what I used (I could still taste it.. OBVIOUSLY I have a more refined palate…)  And a lot of supplies to make more cream cheese frosting (which I did!)

Preheat oven to 350°F. Line 12 muffin cups with paper liners.
Beat sugar and butter together in a bowl using an electric mixer until smooth and creamy; beat in eggs… one at a time.  Mix vanilla extract into creamed butter mixture.
Whisk flour, pecans, cinnamon, baking powder, baking soda, and salt together in a bowl. Mix 1/3 of the flour mixture into the creamed butter mixture until just combined; add 1/2 of the milk and mix until combined. Stir 1/2 of the remaining flour mixture into the batter; add the remaining milk and mix until combined. Mix the remaining flour mixture into the batter and fold in carrots. Scoop batter into the prepared muffin cups.
Bake in the preheated oven until a toothpick inserted in the center of a cupcake comes out clean, 15 to 17 minutes.